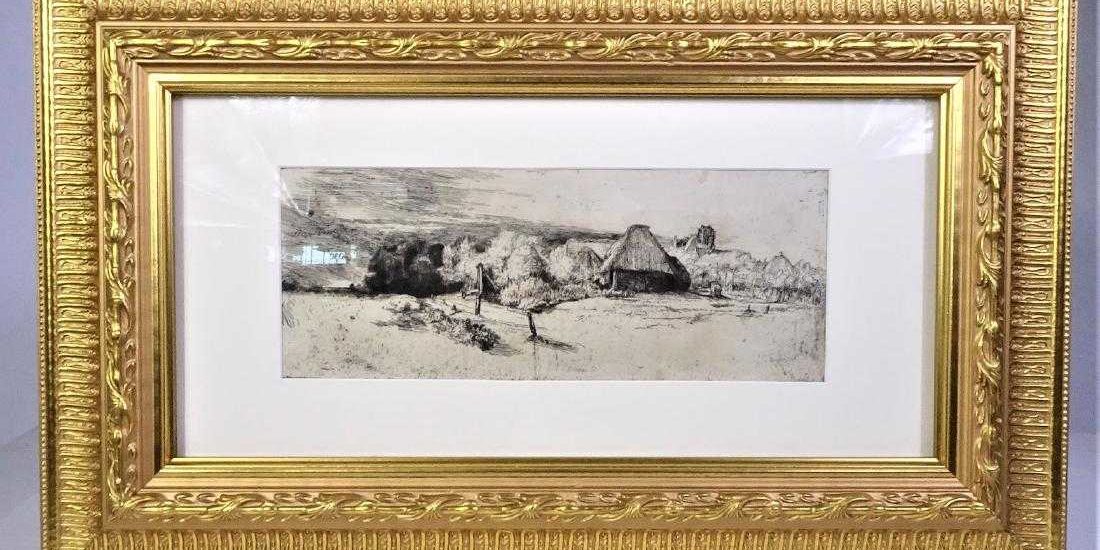 This is an etching and drypoint by Rembrandt entitled “Landscape with Trees, Farm Buildings and a Tower”. The etching was done about 1650, and it’s unsigned and undated. It is the fourth state of five, and it comes with a certificate of authenticity from Stakenborg-Greenberg Fine Art, an art gallery on Main Street in Sarasota, Florida. The etching is listed in Nowell-Usticke’s Catalogue as Nr. 223, and described as RRR, extra rare.

The piece is a very fine impression of the fourth (final) state, and one of the rarest of Rembrandt‘s larger landscape etchings, despite the fact that Rembrandt took this plate through four different states. Very few impressions of this print have come up for auction in recent years.

The plate actually began as a precise record of an existing building, namely the building with the tower at the right. In the extremely rare first and second states, the tower is taller and topped with a cupola and a short spire, and those characteristics helped scholars identify the building as that of tax collector Jan Uytenbogaert. Presumably for artistic purposes, Rembrandt changed the appearance of the tower in the third state by burnishing out the upper parts of the tower and obliterating what it really looked like.

In his landscapes, Rembrandt usually refrained from depicting the sky with etched lines. He preferred plate tone and polishing scratches or sulphur tinting, but here he covered the left side and part of the lower sky with etched lines to indicate dark clouds. The trees on the left are still overcast and dark, while the rest of the buildings are bathed in sunshine. This strong contrast creates the effect of the sun suddenly breaking through receding rain clouds, and the almost blank foreground evokes a sparse and lovely landscape.