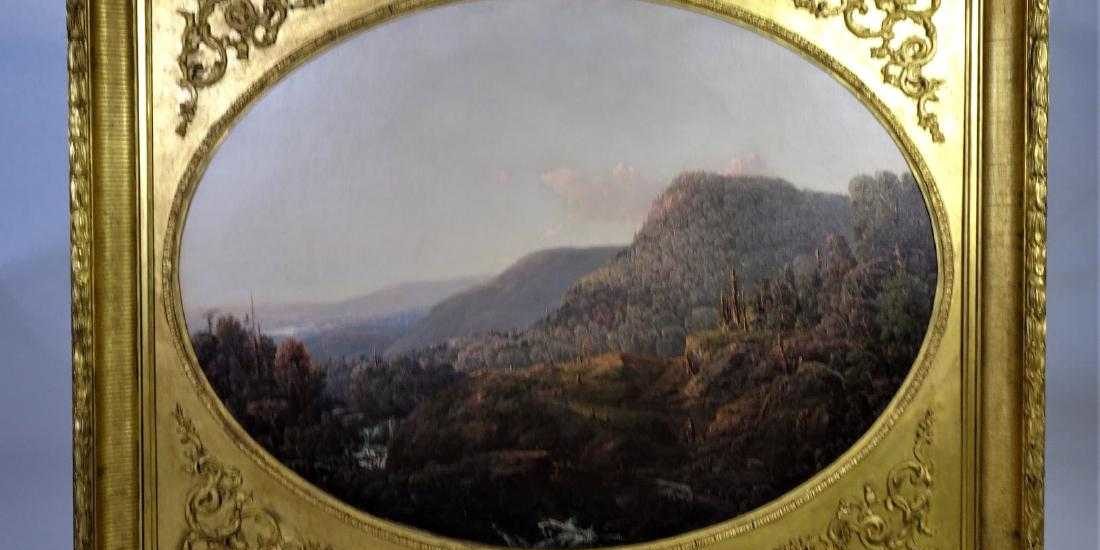 William Louis Sonntag Sr (1822 – 1900) O/C
Upstate NY landscape of the Hudson River. Figures in the foreground
Provenance: NY
O:35 x 43 in.
S:26 x 35 in.
A native of East Liberty, Pennsylvania near Pittsburgh, William Sonntag was a landscape painter associated with the Hudson River School. He is best remembered for his romantic depictions of the American wilderness and “idealized visions of classical Italian ruins” that “reflect the influence of the eighteenth-century neoclassical tradition of English literature and painting”
He pursued his art career despite parental objections, and in the 1840s moved to Cincinnati where it is thought he studied at the Cincinnati Academy of Fine Arts under Godfrey Frankenstein. From the early 1840s to the mid 1850s, he had a studio in Cincinnati and made numerous painting trips in the Ohio River Valley and into the mountains of West Virginia and Kentucky. His style of grandeur, sweeping vistas, and dramatic renderings was much influenced by Thomas Cole.

In Cincinnati, his store-front gallery exhibition got the attention of a Baltimore and Ohio Railroad official who commissioned Sonntag to paint a series of landscapes along the B & O railroad route. The artist combined his railroad painting trip with his honeymoon.

Sonntag’s work gained popularity because of their positive reception in the Western Art Union shows. In 1853, he first traveled to Europe, and returned in 1855 for a year’s study in Florence, Italy. Upon his return, he settled in New York City.