You are here:
May 2019 AuctionWeapons 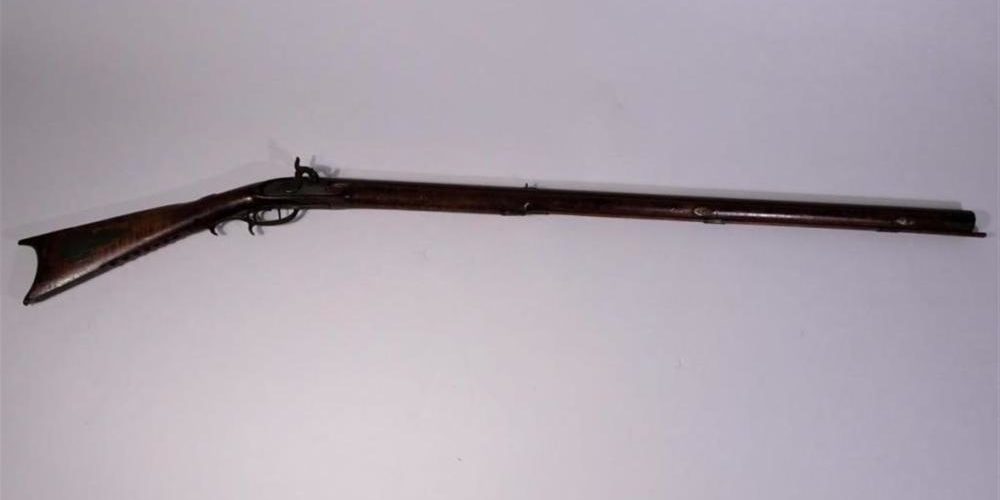 This is a Kentucky longrifle from the late 1700’s or early 1800Â’s. The longrifle is a black-powder muzzle loader with a curly maple or tiger maple stock. Again, the longrifle was developed in southeastern Pennsylvania in the early 1700’s and used rifling (spiral grooves in the bore) to make the gun more accurate than a smooth bore rifle. Gradually, longrifles became more popular than smoothbores, largely because they had a longer effective range. Smoothbores had an effective range of less than a hundred yards, while someone using a longrifle could hit a large target at two-hundred yards or more. The gun first saw major combat in the American colonies during the French and Indian War (1754 – 1763), but the longrifle eventually went out of fashion in the mid 1800’s. The gun is a single-shot piece and weighs 7 3/4 pounds. The octagonal barrel is 35 inches long and the gun has an overall length of 51 inches; the ramrod is 36 inches long. The rifle has a brass trigger guard, a set trigger, an engraved lock plate, a brass patchbox on the right side of the stock, and a heavily curved butt plate. There’s a low front and rear sight. You can also see a 1-inch silver piece wrapped around the barrel, near the front part of the wood. The stock has a nice dark patina and the triggers and percussion cap work. There is no maker’s mark we could identify. There’s rust on the barrel and some light rubbing and scratches on the wood. Some screws on the brass pieces might have been replaced.