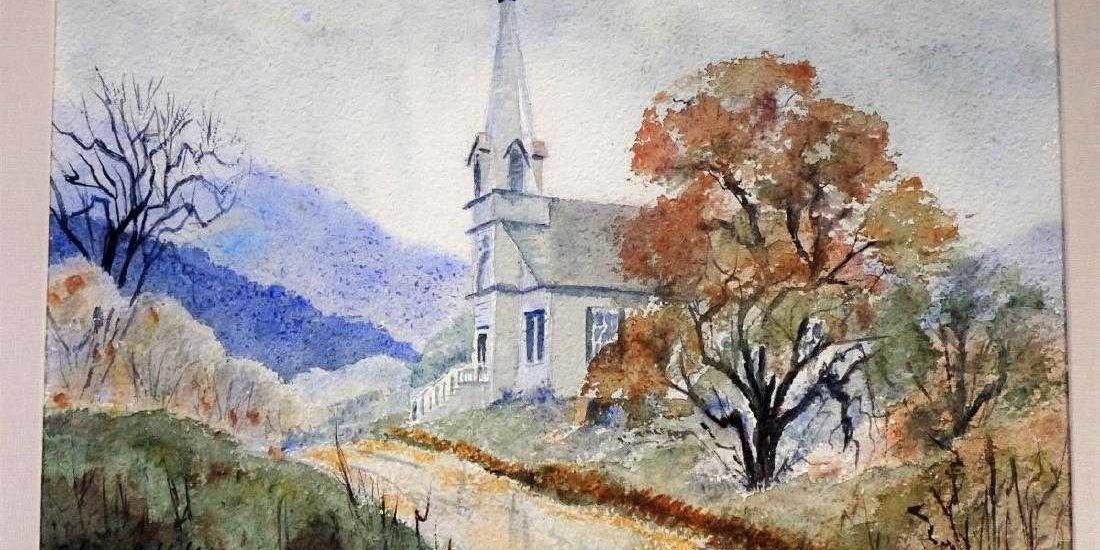 This painting is a watercolor and pencil on paper that is attributed to Edward Hopper. The watercolor is signed “Edward Hopper” and dated “Gloucester 1956”, and it is a previously unrecorded painting by the artist. The watercolor depicts the Orthodox Congregational Church of Lanesville on Washington Street in Gloucester, Massachusetts. Gloucester was the site of many of Hopper’s outdoor watercolors.

Hopper (1882 – 1967) was an American painter best known for his oil paintings, watercolors, and etchings. He studied with William Merritt Chase at the New York School of Design and modeled his style after Manet and Degas. In 1912 traveled to Gloucester, Massachusetts, where he created his first outdoor paintings. He returned to Gloucester throughout his life, and this is one of his paintings from Gloucester.

Hopper was born in Nyack, New York, and after his father died in 1913, Hopper moved to Greenwich Village and turned to etchings. He also became noted for “window paintings” which usually showed a figure gazing out a window, or sometimes the window paintings invited the viewer to look in from the outside. He often used his wife as a model in these paintings. In 1930 a patron donated “House by the Railroad” to the Museum of Modern Art, the first oil painting the museum ever acquired for its collection.

Hopper and his wife enjoyed touring by auto, and their car became a traveling studio. If they found a subject he liked, he would stop and paint, and watercolors were his preferred medium when traveling by car. Watercolors were done on site and offered more immediacy, more spontaneity, than his oil paintings, which took planning and were executed in his studio.

In 1934, Hopper built a house in Cape Cod and began to paint plain wooden houses and the New England architecture which he is now so famous for. He painted homes, buildings, lighthouses, churches; he was just fascinated with architecture and the way these homes and structures cast shadows. Many of the homes he painted had turrets and towers and porches and mansard roofs, and the artist always said his favorite thing was “painting sunlight on the side of a house.” Light was a fundamental component of his work.

The colors suggest an autumn scene, and in front of the church is a rural country road. The road has since been paved over, but you can still see the church if you visit Gloucester. The church is located just a few blocks from Hopper’s “Shacks at Lanesville”. “House at Riverdale” and “Hodgkins House” were other Washington Street subjects he painted in Gloucester.

Although this watercolor is a recent discovery and previously unrecorded, the recorded works by Hopper are incomplete. Lloyd Goodrich, Director of the Whitney Museum in New York City from 1958 to 1968, wrote extensively about American artists, including Hopper, and Goodrich prepared the catalogue for the Edward Hopper Exhibition held at the Whitney in 1964. Afterwards, Goodrich noted that “[The Hoppers] let me go on compiling the catalogue on the basis of the ledgers. Neither of them said a word to me.” The ledgers only recorded works that were exhibited or turned over to Hopper’s dealer for sale. Hopper’s biography reveals that several works, many of them watercolors, went unrecorded and were either given as gifts or were dispersed with other contents of the family home in Nyack, New York.

Works by Hopper rarely appear on the market. The artist was not prolific, painting just 366 canvases; during the 1950’s, when he was in his 70’s, he produced approximately five paintings a year.